The World Forum on Cultural Diplomacy in the UN 2023 »

Terrorists Have No Safe Haven In Pakistan, Envoy Claims

A Pakistani ambassador claimed that his country has driven terrorists out of Pakistan in recent years.
March 10th, 2018 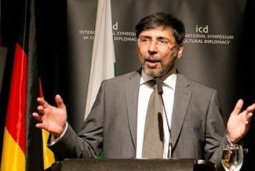 Read the Original Article »
The Ambassador of Pakistan to Germany Jauhar Saleem has claimed that terrorists are not given safe havens in Pakistan and that Pakistan’s military “is stopping terrorists from Afghanistan from entering that country”.

Addressing the annual conference on cultural diplomacy in Berlin, Saleem termed Afghanistan a safe haven for terrorists and called on Europeans to visit Pakistan for tourism purposes.

“Five million Afghan refugees come… but the good thing in the last three years is we have defeated the terrorists there (in Pakistan)… All terrorists were from Afghanistan and other countries in the world, they came for jihad. And the good thing is that tourism is back in Pakistan. Last year after many many years our tourism figure reached two million,” Saleem said.

At the same event, former prime minister of Britain Gordon Brown stressed the need to continue the international community’s support to Afghanistan in order to improve security and economy in the country.

At this event, Afghanistan envoys asked the international community to pressure countries against state-sponsorship of terrorism in a bid to improve security and the economy in Afghanistan and the region.

“Our demand from the officials of the conference was that the countries which are involved in Afghanistan issues and those who create instability in Afghanistan and in the region should be reminded that the best way to improve the economy and expand cooperation is (by strengthening) relations between countries,” Mohammad Ishaq, a university lecturer and a delegate at the conference, told TOLOnews.

Representatives of more than 30 Asian and European countries attended the conference at the Academy for Cultural Diplomacy in Berlin to assess economic challenges in countries and to find ways to overcome the hurdles.

TOLOnews reporter Sharif Amiri, who reported from the event, said part of the conference has focused on crucial issues including security, and fighting insurgency and corruption in Afghanistan. He says that delegates at the event stressed the need to continue supporting Afghanistan to remove the challenges.

The remarks by the Pakistani envoy comes amid increasing pressure by the United States to stop Pakistan from harboring terrorists. The pressure is part of the US’s new strategy for South Asia and Afghanistan.